If you are starting out with scrum as a team, or even new to scrum as a manager, the biggest hurdle to overcome can be handling support requests whilst attempting to complete the work the team has committed to.

The first question that is often asked by the team is - how can we commit to work in the sprint?

The easiest way to do this is when planning the sprint you work out the number of hours that the team has available for work and then take a pot of hours off the top to accommodate support during the sprint.

Doing this allows the team to then be able to task out the stories and commit to the work that they feel they are able to accomplish in remaining hours in the sprint.

The second question is usually - how will support affect the sprint?

With the hours taken off the top the sprint can continue as normal but the time taken for any support work needs to be recorded to show the time that is being spent and one of the best ways to do this is using a burn up chart. 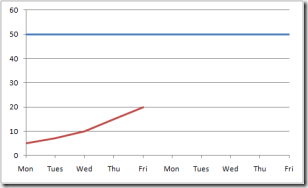 A burn up charts provides a visible way to record the amount of time being spent on a particular task, story, etc.

The third question is – will support cause us to fail the sprint?

The time available in a sprint is a fixed resource, this is a key concept that the business needs to understand. Excessive time spent on support can, and will, cause a team to fail a sprint . 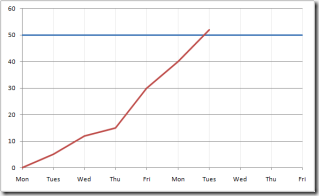 If  the burn up shows the amount of time breaching the allotted time, as shown in the image, then simple mathematics tells us the team will have insufficient time to be able to complete the work they have committed to.

At this point the team needs to talk to the business to decide what work from the sprint will be dropped OR that they the team should stop doing support.

It is most unlikely that any business will agree to stop doing support so stories will have to be dropped from the sprint to allow the team a chance to complete the remaining work, it is up to the business to decide which of the remaining stories provides the most business value.

The fourth, and final question, which is usually asked by the business is – if the team sets time aside for support what happens if they don’t use it?

If the team has found the amount of support less than anticipated they should be looking to pull additional work into the sprint from the backlog.

As with everything to do with support there is a balancing act between the amount of hours you need to keep for support and work you could pull in. As an example if you are half way through a sprint and haven’t used any of the time put aside for support the team should feel confident that they can halve the amount of time in the support pot, but this doesn’t mean you should pull in the same amount of work as hours dropped since most likely there is insufficient time left in the sprint.  The best course of action is for the Scrum Master to do what they would do in sprint planning and calculate the amount of available hours, less the work already in the sprint, and the team work out what can be pulled in.

Next I'll cover planning & scheduling work with scrum
Posted by Nathan at 21:58
Email ThisBlogThis!Share to TwitterShare to FacebookShare to Pinterest
Labels: agile, scrum